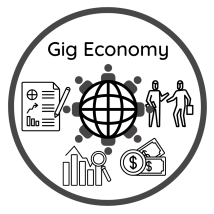 What pops into your mind when you hear the word ‘gig’? Probably a jazz band doing a live performance or a comedian on an open mic night. So how did this word find its way to mainstream business vocabulary? Working nine-to-five for a single employer or being on a payroll had been the norm for a job over the past few decades, but that’s not the reality anymore. Instead of permanent full-time and part-time jobs people tend to choose a variety of short term jobs which are also known as gigs.This has caused a shift in the global labour force.Today an entire ecosystem of independent workers has built around gigging.

Gig economy is a free market economy which is based on freelancing, contract works and jobs in the sharing economy. Trend toward gig work is fast becoming a feature of modern workers, and people are drawn to it.

Gig market can appear so appealing due to two major reasons. Flexibility and autonomy. In addition to or instead of a nine-to-five job people can work on jobs they are passionate about or multiple jobs to earn some extra cash, not only to the real life community but also anywhere in the world. Working multiple roles with multiple income streams, independent of location, is surely more appealing than working on spreadsheets, five days a week.

Main reason for the abrupt popularity of the gig market is the evolution of technology and the development of digital platforms, which allowed contract workers to find new projects and clients with a single tap. Outburst of Covid-19 global pandemic also fueled the rocketing of its popularity as crowds were forced to work from home.

It’s easier to understand the gig market by looking at real life examples. Transportation gigs are the most prominent. Uber and Lyft are now popular worldwide. Service gigs are another sector. Taskrabbit is one of the most popular service gig platforms. Moving, and delivery services come under this category as well. Selling gigs on platforms is the third sector. EBay and Amazon are the most popular selling platforms. Leasing gigs are also a major hit nowadays. Platforms like Airbnb and one fine stay let people rent out their spare space. All of these can be identified as on-demand services. Freelancing websites like upwork and Fiverr, Freelance communities on social media and Colleges provide a platform for employers to reach for gig workers.

Let us reel back to our topic. Can you really go big with the Gig economy? To answer this question, we need to identify the parties who actually benefit from the gig economy. First category is the Employers. and the second category would be the gig workers.

When considering the Employer category, most of the time employers of gig workers are early stage entrepreneurs. It helps Small business owners to get their business going, without committing long term to paying employees. They can find a flexible labour force to support themselves as they develop their product or service. Delivery service can be used for directly selling handmade products for customers. This means the expense for middle man or retail outlets can be taken off the product. This can provide a higher profit to the seller and a cheaper product to the consumer.

Other than small business owners, corporations also seem to benefit from this new trend. Reduced cost of providing healthcare, sick pay and notice period salaries is a great advantage for companies. For traditional employers these expenses have to be covered by the company. By using zero-hour contracts these expenses can be cut off. Permanent employers can focus on high-value work while outsourcing minor tasks to contract workers. Also a large crowd of flexible employees with a variety of expertise, guarantees that the large companies have a reliable worker to cover the job despite the location or the nature of it. Freelancers can even save the infrastructure expenses for companies.Busy seasons require a larger task force. Recruiting seasonal workers to fill in during these seasons is more cost friendly.

Now, let us focus on the second category, employees. Flexibility is one of the biggest draws of gig work. Availability of freelancing opportunities at the fingertips, possibility of remote working at your own pace can be summarized as flexibility. Without the pressure of a strict schedule, employees can decide when to work and the duration of their shift. Low commitment meaning the ability to depart and take the employment elsewhere without hesitating is another benefit. Also pursuing a project which the employee is passionate about, while earning cash to pay the bills can be truly satisfying. Gig market is the ultimate safety cushion, in case the traditional employment falls through. While job hunting people can always rely on gig market for a sustainable income, allowing them to take time and find best fitting employment.

Considering all of the above many advantages one might rule out even the possibility of the gig economy being rigged. To gain a more neutral perspective on the matter, let us weigh both pros and cons.

From the prospect of businesses, there are several issues that can be addressed on the subject of employing gig workers. Since the workers are not as invested, it reduces employees incentive to perform outstandingly on the task at hand. Another downside is regulations on contractor status. Paperwork needed for these types of job settlements can be quite different from the traditional employees. Awareness on such conditions from the employers side is mandatory.

However these concerns can be easily overlooked when comparing with the benefits businesses gain from gig workers.

Not only employers but also gig workers come to terms with many drawbacks in this system. The stability that comes from being a salaried worker with health insurance and pension plan can be incredibly valuable to live a stress free life. Gig workers Lack this kind of stability and therefore experience high stress. Also they can be left jobless at the drop of a hat, so the gig employers are in constant stress. The hustle of juggling multiple jobs can be overwhelming at times. Corporations tend to use the short time contractors as an excuse to avoid paying minimum wage, healthcare, and paid sick leave for their employees. This leaves people concerned if the autonomy promised in the gig economy could be a scam to exploit Labour from unemployed individuals and people in need of an extra income.

When analysing all the pros and cons encountered by both parties, disadvantages for employees seem to outweigh the advantages but for the companies it’s clearly the opposite. Based on the above information we can figure out an answer to our Initial question: can you go big with the Gig economy or is it really rigged?

It can work well for people seeking a little extra cash but it has major drawbacks for those who are trying to cover all the living expenses through only gigging. Between freelancers seeking a solid contract and the employers seeking a reliable, collaborative workforce, employers always get the upper hand. Therefore the concept of gig workers ‘being their own boss’ in the gig economy can be a rather misleading statement. It’s quite evident that the ‘rags to riches’ story of a freelancer doesn’t become a reality, very often in this economy, despite the buzz social media has created around it. Like every other aspect in the world gig economy also has its own limits but if you can choose your options wisely and learn how to manipulate the chances in your advantage, going big with gig economy is doable.Good timing, being creative, working smarter rather than harder is what an individual needs to tackle the obstacle of getting exploited. Advertising yourself is also vital to survive and social media is the key.

The bottom line is as much as the gig economy is rigged it’s not showing signs of slowing down anytime soon.The real deal is finding what works for you and creating the best out of the situation. Gig market is thriving now more than ever. So if you can ride the wave, without falling into traps of exploitation, who knows, maybe you’ll end up on the cover of Forbes magazine as well.

Next Power of Teamwork and Humility Within a Workplace

How does the advancement of Information Technology influence female entrepreneurship?

How Important is Tech Education?

ESTABLISHING EQUITY AND ACCESSIBILITY IN ENTREPRENEURSHIP